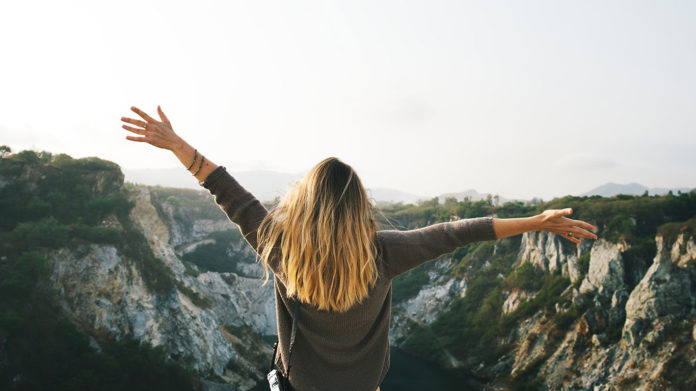 To prevent or heal from an autoimmune disorder, you’ll need to identify your personal triggers so you can eliminate them, minimize your exposure, or, in the case of hormone, get them balanced.

The 6 major autoimmune trigger categories are:

Hormones. You can’t see them, but you can certainly feel them when they’re out of whack. These tiny messengers of the body may be the most critical underpinnings of our health and wellbeing. Studies show that hormonal imbalance is directly correlated to the development and perpetuation of autoimmune conditions. The intersection of autoimmunity and hormones is a vast and complicated topic, so let’s simplify things by focusing on the two main root cause culprits in your control: sugar and stress.

Anna was a vivacious working mom of three when the worst happened. Her eighteen-month-old son died in a tragic accident. After her excruciating loss, Anna’s deep grief, lingering depression, and mounting stress showed up on her body and lab tests. She gained eighty pounds, lost her hair in clumps, and went into premature menopause and ovarian failure. Doctors offered her anti-depressants, sleeping pills, and a painful prediction that she would never get pregnant again.

Anna refused to accept the doctors’ dictates, and instead sought her inner strength to prove them wrong. She herself was a triple board–certified doctor after all! Anna’s research and quest for natural solutions led her to adapt a “green” version of the ketogenic diet, which meant limiting sugar and starchy carbs, and adding nourishing fats along with loads of green vegetables and moderate amounts of protein. Anna also discovered the power of oxytocin — the love and bonding hormone — and set out to cultivate it as much as possible by prioritizing hugs, connection, and laughter. By ramping up her oxytocin production and changing her diet, Anna’s insulin sensitivity improved, she lost those eighty pounds, ran a triathlon, and with great joy, conceived and gave birth to a healthy baby girl at age 41.

For decades, I wrestled with severe PMS, bad acne that followed me into adulthood, and MS symptoms that worsened with stress. A well-meaning OB/GYN put me on the birth control pill at age 15 to help mitigate my PMS, and over the years, subsequent OB/GYNs told me there was no harm in staying on the pill until menopause. None of these doctors ever educated me on the possible causes for my PMS or acne—let alone made any connection between my hormonal challenges and MS. I had no idea my Standard American Diet (SAD) of high sugar and excess carbs coupled with an always-on stress reaction could throw my hormones into a tailspin, or that my hormones might be contributing to my MS. While I proactively addressed the stress best I could with various relaxation efforts, I didn’t learn of the harm that I was doing to my body by consuming gluten, sugar, and synthetic hormones until I was in my forties. When I embraced a Paleo-template diet and ditched the pill, I not only eased my hormonal misery, I also stopped the expression of MS in my body.

Anna and I have very different stories, but the broad strokes are similar: sugar and stress wreak havoc on our hormones. Given enough time, hormonal imbalances often lead to, or worsen, any number of devastating conditions including insulin resistance, diabetes, obesity, autoimmune conditions, cancer and Alzheimer’s disease.

Hormones may be tiny, but these molecules are mighty. The chemical messengers of the endocrine system, hormones are released by various glands (the pituitary, thyroid, adrenals, etc.) to communicate to your cells, prompting numerous vital functions, like triggering the onset of puberty, regulating appetite and blood sugar, and repairing damaged tissues. With so much at stake, it’s no wonder that hormone imbalances have the potential to cause so much trouble.

When your hormones communicate correctly, referred to as “hormonal homeostasis,” you sleep well, your energy’s high, your optimal weight is easy to maintain, your immune system is strong, and you’re more likely to be in a good mood. That’s “hormonal harmony.” But too much or not enough of even one hormone can throw the whole thing off balance and leave you more susceptible to autoimmune conditions or other chronic illnesses. Think of it like a lock-and-key formation; the hormones are the keys that bind to receptors on or inside cells, unlocking critical processes within your body. If your glands don’t produce enough hormones (keys) or your receptors (locks) are too clogged with toxins, the gate to hormonal harmony and good health stays locked, and the misery begins.

If you have decreased energy, brain fog, moodiness, or trouble managing your weight, you may be one of the millions of Americans in a state of hormonal imbalance. And if you’re a woman, you’re three times more like to develop an autoimmune disorder — although men can certainly experience hormonal imbalance too.

The eight hormones most implicated in the development and perpetuation of autoimmune conditions include the following:

The Six Most Common Hormone Imbalances

If any one of the eight hormones above isn’t released or received as it should be, you have a hormonal imbalance. A single hormonal imbalance puts every other hormone at risk, potentially leading to any combination of the following imbalances, which are those most likely to contribute to autoimmune and other chronic disorders. Take special note of how high stress and diet-related choices (specifically excess sugar) greatly contribute to these imbalances.

If you go to the doctor with any collection of these symptoms, you’ll undergo a few tests and end up with some prescription medications, but eventually, you’ll be told that whatever you have going on is just part of getting older. While it’s true that hormones decline with age, our modern lifestyle—daily high stress, a diet based on refined sugars and carbohydrates, and constant exposure to environmental toxins—only serves to speed up the process. The fact is that developing autoimmune disorders, diabetes, and other chronic illnesses is not normal, and hormonal imbalance is not inevitable.

Here’s how to get back to hormonal homeostasis:

This is really a two-phase step that first requires looking inward, and then, looking outward for help:

The fastest way to establish hormonal homeostasis is to address the other top autoimmune triggers: Food, Infections, Gut Health, Toxins, and Stress. For most people, when all other aspects of your health are in in tune, your hormones naturally fall in line.

Sometimes lifestyle modifications aren’t enough to balance hormones. If you find you need extra support, like I did, these are supplements that are scientifically proven to help. Based on your lab results and symptoms, your practitioner can help you determine the best combination of supplements and proper dosage for you.

• To lower cortisol – Ashwaganda* or Rhodiola and Phosphatidylserine (PS)
*Note: Ashwaganda is a nightshade so avoid if sensitive to the Solanaceae (nightshade) family; or if pregnant.

• To raise DHEA – over the counter: oral micronized DHEA start with low 5 mg dose in the morning

When to Consider Bioidentical Hormones

If you’ve tried addressing each of the other autoimmune triggers, implemented lifestyle changes, and introduced appropriate supplements with little or no changes, it may be time to consider bioidentical hormones. You’ll need to seek out the help of a practitioner well experienced in balancing hormones. She or he can guide you on the best options for your particular imbalances and health considerations.

Hormones and autoimmunity can be a daunting topic, but I have learned more than I ever imagined and have condensed that knowledge and personal experience into a book called Beat Autoimmune, The 6 Keys to Reverse Your Condition and Reclaim Your Health.

May you experience optimal hormone balance and resulting good health. 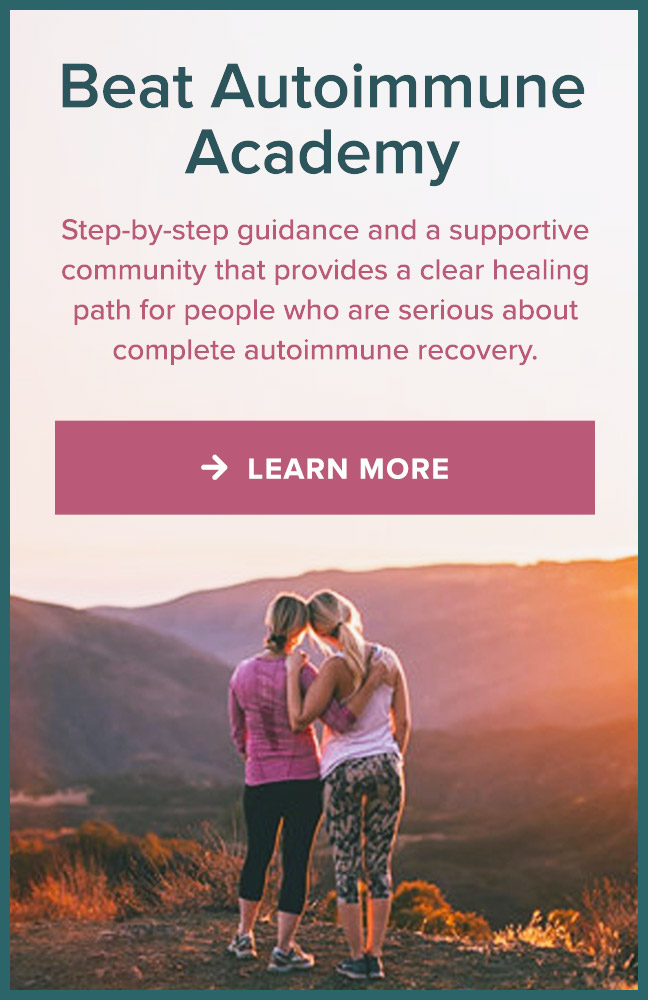 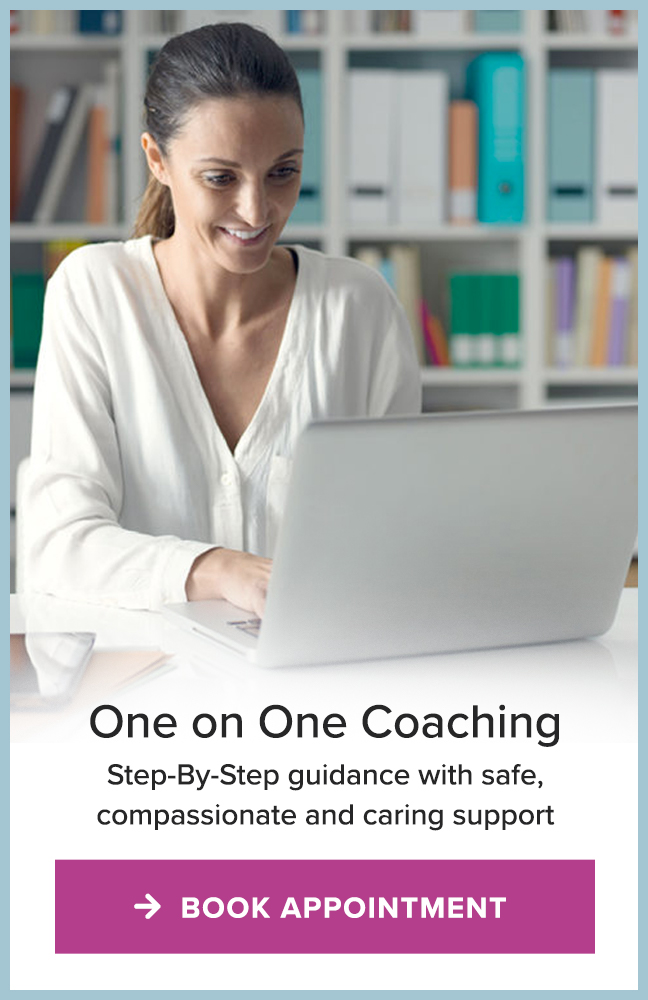 “Working with Palmer changed my life. I was diagnosed with MS on Nov 1, 2016 and had the good fortune to begin working with her that same week. By following Palmer’s advice, I started to heal by removing inflammatory foods and by following a Paleo template diet. Within weeks, my MS symptoms subsided, and I felt ready to address stress and childhood traumas that had been plaguing me for decades. Today, I am completely free of MS and my family and friends view me as a role model for health and wellbeing. Palmer’s coaching and her F.I.G.H.T.S.™ framework changed my and my family’s lives, and I have every reason to believe it will change yours too.”

“Before working with Palmer, I had trouble just getting through the day. I had tummy pain and IBS-symptoms so bad I could barely leave the house. I was so tired I would frequently fall asleep at work, and I didn’t have the energy to exercise. My hormones were so out of whack I had debilitating monthly cycles and extra weight that wouldn’t budge. By following Palmer’s anti-inflammatory food plan, taking targeted supplements, and detoxing slowly, I was able to heal my gut and reverse all symptoms of celiac disease and Hashimoto’s thyroiditis. Now I’m running 5Ks with my daughter and enjoying life instead of dreading it. If I can beat autoimmune, you can too!”

“I don’t know where I’d be without Palmer’s help. I didn’t know that it was even possible to reverse my lupus, Sjøgren’s, Raynaud’s and Hashimoto’s. I don’t think I would have taken the radical step of changing my lifestyle and taking responsibility for my health outcomes. I am now completely free of autoimmunity and joint pain, tapering off meds, and running again! Even better, I’m ALIVE and fully present for my sons!”

There’s Never Been a Better Time to Beat Autoimmune